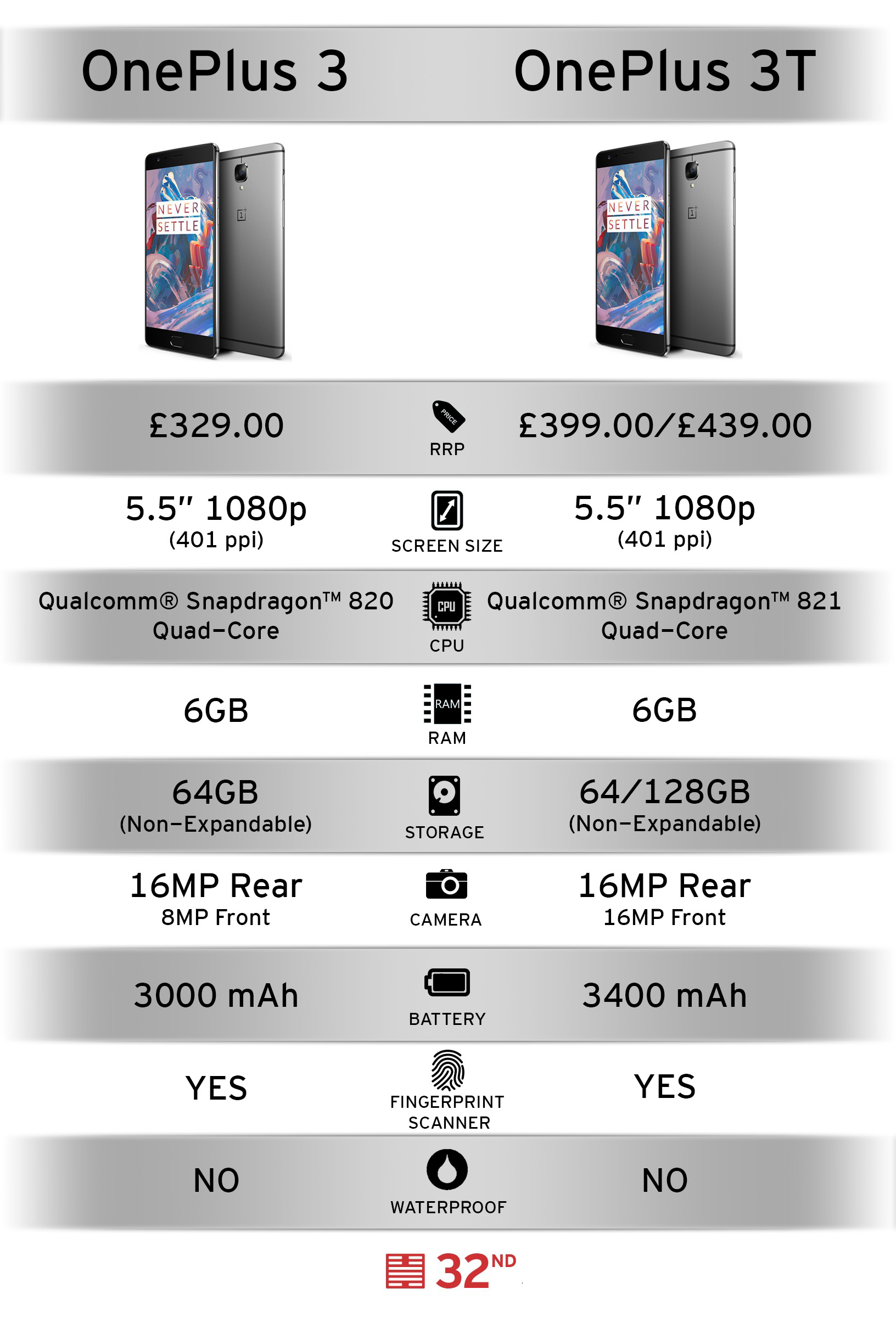 OnePlus have recently launched a follow up to the popular OnePlus 3 Smartphone, the OnePlus 3T. The updated smartphone hit the stores in November.

The OnePlus 3T looks very familiar, this may be something to do with the fact that both the OnePlus 3 and OnePlus 3T are in fact identical in almost every single way. This is not exactly a bad thing, the OnePlus 3 was a fantastic looking android phone with solid build quality. So the OnePlus 3T feels equally as well made as its predecessor, and rivals even top end phones costing much more. The only real difference in terms of the design is a new colour option, the OnePlus 3T is now available in a very nice Gun Metal grey colour.

The front facing 'selfie camera' has been supercharged from a respectable 8-megapixels to an eye watering 16-megapixel shooter. Offering better low light performance and sharper images.

Both phones use the same 5.5 inch 1080p AMOLED display so don't expect a huge improvement there. While the OnePlus 3T's display is as good as any other 1080p panel it is not uncommon to see 4K screen on today's flagship models. Though you should expect to pay a premium for the bump in resolution.

The OnePlus 3T has a 3,400 mAh battery compared to the 3,000 mAh battery of the OnePlus 3. With a 13% increase you would expect the OnePlus 3T to last noticeably longer than its predecessor. In the real world however, you may not notice the increase in battery life. With both devices performing equally in tests. Hopefully OnePlus can improve this in the future with a software update.

Both phones have a huge 6GB of RAM, making them lightning fast, especially when combined with the powerful Snapdragon 820 chipset found the the OnePlus 3. The OnePlus 3T opts for the revised Snapdragon 821 chipset that promises a 10% speed increase over the previous model. However it is doubtful that the average user will notice the upgrade as both phones perform even the most demanding tasks with ease.

Overall the OnePlus 3T is a worthy successor to the previous incarnation, however if you already own the OnePlus 3 I would not recommend upgrading. Having said that if you currently own an outdated flagship from yesteryear and you are looking for a great performing, high quality android smartphone at a reasonable price it is defiantly worth considering as a cheaper alternative to more expensive flagships.